I’ve been looking forward to May for quite some time for several reasons:

1) The weather – There’s an argument that April 25th is the best date because it’s not too hot, not too cold. All you need is a light jacket. I would argue, however that May is a whole month of April 25th’s

3) Ian Somerhalder – I get to turn the next page in my calendar. Ok, so that happens every month, and is really just an excuse for me to post a picture of a hot guy on my blog: 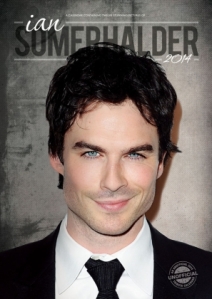 4) BEDM – Blog Every Day in May. This is a thing, apparently. First introduced to me by Nic Parkes (find out more about him here: http://hellonic.co.uk or indeed here: https://twitter.com/picnarkes) who took part last year.

Believe it or not, the idea is to Blog. Every day. In May.

It’s not Nic’s idea, he freely admits that, but he’s come up with the list of topics which I’ll be following – or at least attempting to follow.

Oh, yes, that’s right, you poor sods. I’m gonna be blogging every day for a month.

You might be wondering why I’m doing it. The truth is, when Nic did it last year, I thought it was a great challenge for a writer to set his or her self. I thought:

One day, I’ll do that as well.

So it’s May. I have a blog. It’s like the stars have aligned.

Plus, I perform well with deadlines and thought it would be yet another tool to help me flex my writing muscle.

It might be quite difficult, it might take quite a lot of time, I might run out of things to say by the 6th, but by the end of May, I’ll be able to say I’ve done it. Tick it off my bucket list as it were.

Not that I believe in bucket lists. If you want to do something, then just go ahead and do it.

Want to go to Australia? Go.

Want to write a book? Do.

Want to go out with a bloke? Ask.

Want to write every day in May? Write.

I won’t reveal the topics ahead of time (although it wouldn’t take a genius to find them) – and I won’t necessarily stick to the topics, I may just be inspired or prompted by them – but I will post them at the end of each daily blog. Sometimes the connection between the blog and the prompt will be obvious, other times it’ll be a mystery to all but me.